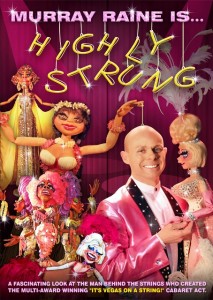 Marionettist and UNIMA Australia member Murray Raine has recently had a documentary made about his life’s work, which was released on DVD in November 2014. The film was produced & directed by Tasmanian documentary film maker Peter Oldham.

“Murray Raine is…Highly Strung” is are a rare gem of a documentary – the film not only guides you through Murray ‘s fascinating journey as a puppeteer but it has rare archival footage of other Australian puppetry greats like Peter Scriven’s Tintookies, Norman Hetherington’s Mr Squiggle and Marti McClelland’s marionettes. There are insightful interviews from leading puppeteers like Richard Bradshaw, Sue Wallace and Steve Coupe from Sydney Puppet Theatre, Peter Oldham (from The Tintookies) and Marti McClelland.

The film captures Murray’s spectacularly flamboyant style and mastery of marionette design and manipulation. It showcases several of his stunning marionette creations, including Vegas showgirls decked in gorgeous plumes of pink, a koala on a flying trapeze and a whole host of hilarious celebrity caricatures like Madonna, Liza Minnelli, Elvis, Pavarotti and Dolly Parton. There is also some lovely footage of Murray creating his “Madame Tipsy McBoozle” puppet from start to finish in his workshop, which is particularly interesting for puppet makers.

This is an important film for Australian puppetry history and particularly good for people interested in marionettes.

The DVD costs $25 AUD (with $5 AUD Postage within Australia. International shipping is available). For more information about the DVD go to: http://www.murrayrainepuppets.com/dvd.html

Thank you @ronnieburkett for a thoroughly engaging and awe inspiring talk with Alex Joy @oneorangesockproductions It was a fantastic way for UNIMA Australia to wrap our 2022 Program of events for our members. Ronnie discussed his upcoming shows, including his hand puppet show The Loony Bin which heads to Montreal’s International Puppetry Festival very soon. Ronnie and his assistant @alexandermantia showed puppets being out together in the workshop and answered the audiences questions on marionette building, writing for puppet theatre and voice characterisation. The committee at Unima Australia is thrilled to have brought its members 17 events over the last 10 months. Please, if you’ve attended on of our events, share your feedback in our latest members survey so we can bring you something even better next year!And that’s a wrap! Bring on 2023!#puppetpower #puppetshow #puppetrytraining #puppettheatre #puppetmaking #puppetbuilder #puppetbuilding #ronnieburkett #marionettes #marionette #handpuppets #unima ... See MoreSee Less

New show in Sydney 2-12 Nov! Written by Thomas Hetherington-Welch and Oliver Durbidge, "Everynight!" is the 2022 Major production for Sydney University Dramatic Society (SUDS) and will be shown in the Reginald Theatre at the Seymour Centre. It follows a character named B who enters their own dreams and encounters all kinds of whacky characters and crazy hijinks. Puppets and Puppetry are at the core of the show. Thomas (grandson of Norman Hetherington who was creator of Mr Squiggle and the founding President of UNIMA Australia) spent this year designing, and the last few months building, the many different characters that B encounters in the show. www.seymourcentre.com/event/suds-everynight/ ... See MoreSee Less

When this happens, it's usually because the owner only shared it with a small group of people, changed who can see it or it's been deleted.
View on Facebook
· Share

ITS HERE! Our last event of the 2022 UNIMA Calendar! And we are going out with a bang! In Conversation: Ronnie Burkett with Alex JoyIn this two hour session, join us for a live interview with Ronnie (@ronnieburkett) and UNIMA Committee Member and host of Talking Sock podcast Alex Joy (@oneorangesockproductions )As they discuss life after lockdowns and moving into Ronnie’s next work, The Loony Bin. You’ll also have the opportunity to speak to Ronnie and pose a question. Head to the links in our bio to find out how to register and how to ask your question.Looking forward to seeing you at 12PM SUNDAY NOVEMBER 6 AEDT Australians, we have five time zones so make sure you make the time adjustment! Tickets are free for members. $20 for non-members. See you there! ... See MoreSee Less

After the Silver Linings Awards ceremony we had our Spooky social and pumpkin carving zoom! Thank you to those who stayed and made spooky crafts with us! People got creative and carved a pumpkin, capsicum, potato, orange and clay. There was even a shadow puppet! #unima #puppetpower #Halloween #unimaoz ... See MoreSee Less

This Sunday also doubles as our Awards Night for the Silver Linings Film Festival. 7-9pm! See you there! ... See MoreSee Less

SUNDAY OCTOBER 30 7PM AEDTJoin committee members and puppetry pals as we announce the winners of our UNIMA Australia 2022 Silver Linings Puppet Film Festival.And celebrate the incoming of the holiday season with a casual catch up complete with pumpkin carving! Bring a pumpkin, some protective gloves and your best carving implements along to prepare your doorstep for Halloween!Registrations are via the Trybooking Link in our recent members email, or via the Instagram Link in our bio! See you there!#Halloween #allhallowseve #unima #unimaoz #unimaaustralia #puppet #puppetry #puppetpower #puppeteer #puppetbuilder #pumkincarving #silverlinings ... See MoreSee Less

The 2022 Silver Linings Online Puppet Festival is here! youtube.com/playlist?list=PLvY_CkuVhyYha7H-q2YDNM8634E6uvyg6Click the link above to access our Youtube channel and find the playlist of this year’s entries. You can also see it on our UNIMA Australia website: www.unima.org.au/silver-linings-film-festival-2022/ We encourage you to gather your besties, grab some popcorn, grab a drink and watch together. This year we have had 8 submissions from Australia and abroad. They will be judged by members of our UNIMA Australia Committee. You can also vote for your favourite film for our People’s Choice Award! 🏆🏆🏆forms.gle/VBc4BkFftrcyAshL6Voting closes 29th October, 2022. Winners will be announced on Sunday 30th October 2022 at our UNIMA Australia Spooky Showcase Zoom event. UNIMA Australia is about friendship through puppetry - promoting peace and hope through our art form. We hope that everyone can find keep finding joy, hope and ‘silver linings’ wherever they may be. Thank you to our sponsor Lumin's Workshop - Cosplay and Fabrication Supplies for awarding gift vouchers to our winners! Lumin’s Workshop offers a myriad of materials for makers, crafters, cosplayers and more. They are based in Melbourne, Victoria.www.luminsworkshop.com/Winners will also receive a year’s membership to UNIMA Australia, the official puppetry organisation of Australia. Membership is open to anyone around the world. For more information please go to www.unima.org.au/membership/#unimaoz #silverliningsunima #puppetpower #puppet #puppets #puppetry #puppeteer #puppetryarts #puppetfilms ... See MoreSee Less

We are excited to be launching our Silver Linings Film Festival this Sunday!Our playlist will go live on our UNIMA Australia Youtube Channel and Unima Australia Facebook page. Grab some drinks and nibbles and get ready for some uplifting puppet films :)Thank you to everyone who contributed :)When: Sunday 23rd October at 8pm AEDT5.00 pm WA6.30 pm NT7.00 pm QLD7.30 pm SA8.00 pm NSW/VIC/ACT/TASWe invite everyone to also vote for their favourite film, which will count towards our People's Choice award (a Google form will be sent out along with the playlist).Winners will be announced at our UNIMA Oz Spooky Showcase & Pumpkin Carving Zoom on Sun 30 Oct @ 7pm AEDT.Thanks again to Lumin's Workshop - Cosplay and Fabrication Supplies for partnering with us and offering prize vouchers! Featured puppet by Dominic Castro from Macquarie Fields High School (Sydney, NSW, Australia). #silverliningsunima #unimaoz ... See MoreSee Less

Come and check out an outrageous new puppet show for adults performed by Master puppeteer Murray Raine Puppets Australia! This hilarious fifty minute sci-fi cabaret burlesque lands at Trades Hall this October 15-23 for the Melbourne Fringe - it will make you question everything you thought about puppets, burlesque and aliens! melbournefringe.com.au/event/they-came-from-uranus/ ... See MoreSee Less

They Came From Uranus | Melbourne Fringe

Oh yes, the aliens have arrived but not quite as NASA predicted. Prepare to be horrified, shocked and possibly slightly aroused by a cast of the most extraordinary extraterrestrials to ever hit a burl...
View on Facebook
· Share

We’ve extended our deadline for Silver Linings! You now have a few extra weeks to submit your puppet film 😅Fri 14 Oct - Deadline for puppet film entries Sun 23 Oct - Silver Linings Film Festival Watch Party @ 8pm AEDTSun 30 Oct - Winners announced at UNIMA Oz Spooky Showcase & Pumpkin Carving Zoom @ 7pm AEDTThanks again to Lumin's Workshop - Cosplay and Fabrication Supplies for partnering with us and offering prize vouchers! This is open to anyone around the world - We can’t wait to see what you come up with 🤩www.unima.org.au/silver-linings-film-festival-2022/#silverliningsunima #unimaoz ... See MoreSee Less

We’ve extended our deadline for Silver Linings! You now have a few extra weeks to submit your puppet film 😅Fri 14 Oct - Deadline for puppet film entries Sun 23 Oct - Silver Linings Film Festival Watch Party @ 8pm AEDTSun 30 Oct - Winners announced at UNIMA Oz Spooky Showcase & Pumpkin Carving Zoom @ 7pm AEDTThanks again to Lumin's Workshop - Cosplay and Fabrication Supplies for partnering with us and offering prize vouchers! This is open to anyone around the world - We can’t wait to see what you come up with 🤩www.unima.org.au/silver-linings-film-festival-2022/#silverliningsunima #unimaoz ... See MoreSee Less