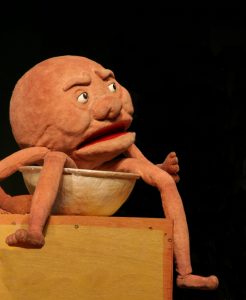 “Albert the Magic Pudding, made by Sydney Puppet Theatre, commissioned by Marian Street Theatre for Young People for a new theatre version of The Magic Pudding, written by Andrew James, directed by Margie McCrae with music by Sarah de Jong. 2010” 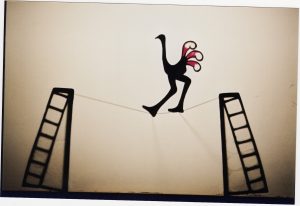 A puppet of Albert, ‘The Magic Pudding’ himself and the books written about him, posters, photos and documentaries will be presented

A great time had by all at our Crafty Social on Sunday where members got together to prepare a puppet for the @unima_internationale video project for #worldpuppetryday2022 focussing on Aquatic Life and Marine Worlds. We also released our suite of events for 2022. It’s going to be an exciting year! Members have until February 15 to send a landscape video of 15-30 seconds into UNIMA international to be featured in their video on March 21. If you’re having trouble, do reach out to your committee for help! We’re here for you. Our next event will be our artist talk with Dr. Emma Fisher-Owen and Ivan Fisher-Owen on February 6. Check them out here Beyond the Bark puppet and installation theatreMake sure you get yourself a UNIMA Oz membership or renew so that you can reap the full benefits of all our free events and cheaper registration on paid events this year.www.unima.org.au/membership #puppeteer #puppeteers #puppets #puppet #puppetry #puppetbuilder #puppetmaker #unima #unimaoz #unimainternationale #unimainternational #puppet #puppetpower ... See MoreSee Less

We’re kicking off our 2022 season with a crafty social! The @unima_internationale theme for this year’s World Puppetry Day (21st March) is ‘Aquatic Life and Marine Worlds’ - so get ready to make some sea creature puppets! Bring along your recycled goods/trash, some tape, scissors and other crafty tools to make a creature from the sea - whether it’s a scrappy squid, plastic porpoise or water bottle whale, the world is your oyster! 😉Photos/videos of our creations will be put together to send to UNIMA International for their video project, which will be shared on World Puppetry Day (all videos are due by 15th Feb, 2022). For more info about the project go to www.unima.org/en/150-days-before-world-puppetry-day-2021-2/ When: Saturday 22nd JanuaryTime: 5pm AEST 2pm WA3.30pm NT4pm QLD4.30pm SA5pm NSW/VIC/TASThis online event is FREE and open to all members of UNIMA Australia. Members, reserve your virtual seat now to access the zoom link!Registrations close at midnight (AEST) on Friday 21st January, 2022. Want to become a member of UNIMA Oz and access all our events for free? Visit the link in our bio.#puppeteer #puppeteers #puppets #puppet #puppetry #puppetbuilder #puppetmaker #unima #unimaoz #unimainternationale #unimainternational #puppet #puppetpower #worldpuppetryday2022 ... See MoreSee Less

Following on from our AGM you are welcome to join us for our last zoom social for the year! The theme is 'Puppet Nightmare Before Christmas'! We'll take a quick break after the AGM to allow people to get snacks, drinks and get into the festivities (feel free to dress up or bring a puppet if you wish!)If you have any issues, please contact General Secretary Kay Yasugi. Link in bio!🎃😱👻😬 ... See MoreSee Less

Dear UNIMA Members,We are now a week away from our Annual General Meeting on Sunday 19th November! We will be conducting the meeting online via the Zoom. All financial UNIMA Australia members are welcome to attend. Please see below for the details and some of the reports.UNIMA AGM via ZoomDate: Sunday, 21st November, 2021Time: 5:00 PM (AEDT) ACT, NSW, VIC, TAS4.30pm SA4.00pm QLD3.30pm NT2.00pm WADetails emailed to all financial members. See you there! ... See MoreSee Less

CZECH US OUTThank you Puppets In Prague (@puppetsinprague )for running our recent Automata Design Artist Talk. It was fantastic to learn from Master Carver and Toy/Puppet Designer Mirek Trejtnar, who showed us various tools, mechanisms and demos for designing our own wooden automata. This 2 hour zoom session was part of the Puppets in Prague online Weekend Workshop Series, and we were very grateful to have it at an Aussie friendly time. We hope to organise another one in the near future! #puppeteer #puppeteers #puppets #puppetry #puppetbuilder #muppets #unima #unimaoz #unimainternationale #unimainternational #puppet #puppetpower #automata ... See MoreSee Less

Tomorrow! Puppets in Prague are hosting a special artist talk on the process of creating automata. An email has gone out to our membership last night but this is an open event for anyone interested. Join us from 5:30-7:30 Friday 24 September. The following week, we’re hosting a members get together to put our learning into practice and make automata together! Hope to see you there! Details and pricing @puppetsinprague ... See MoreSee Less

UNIMA was founded in Prague. The plaque of foundation is on public display ... See MoreSee Less

When this happens, it's usually because the owner only shared it with a small group of people, changed who can see it or it's been deleted.
View on Facebook
· Share

Tea and Puppets Sunday 4th July @ 2-4pm AEST12-2pm WA1.30-3.30pm SA/NT2-4pm NSW/VIC/QLD/TASYou are invited to our relaxed online puppet social. Feel free to drop in and bring along a puppet, a project you're working on or simply a cuppa and snacks. The social will be hosted by Katherine Hannaford, our Treasurer and Membership Secretary (thank you Katherine!)Members can find the Zoom link in the email sent by our secretary Kay, check your other folders in case you missed it!Not a member? If you'd like to attend and talk membership please RSVP by contacting our General Secretary Kay at secretary@unima.org.au 🙂#TogetherInLockdown #friendshipthroughpuppetry #wegotthis #puppetryarts #puppetry #puppeteer #puppetbuilding #puppetdesign #puppetdesigner ... See MoreSee Less

Members, applications close soon for the UNIMA Lorrie Gardner Biennial Scholarship!You can get all the information at:www.unima.org.au/grants/ ... See MoreSee Less